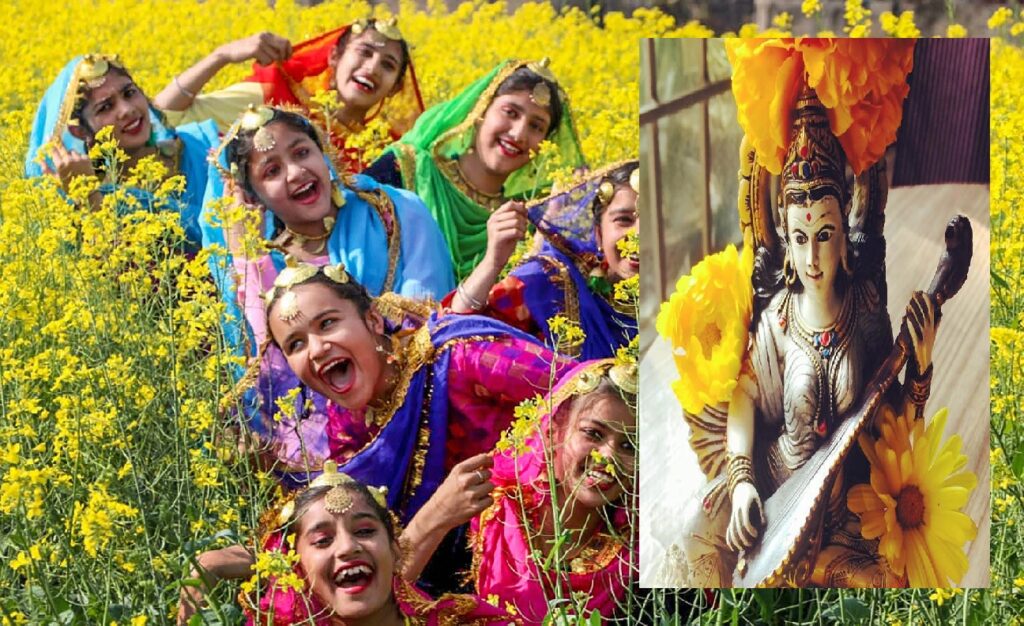 Basant Panchami is also known as Sripanchami. It is a major festival celebrated in North and Eastern India.

The festival is celebrated in the spring season, as the seasons in ancient India were divided into six parts and spring was the most beloved season of the people.

That is why, since ancient times, people celebrate this festival of Basant Panchami with so much fanfare.

Yellow robes are worn by women on this day. The festival of Basant Panchami is also celebrated as the advent of spring season.

This festival of Basant Panchami comes on the fifth day of Magh month, which is seen as an important change in weather. Due to religious and historical reasons, the day is celebrated all over India with great enthusiasm.

Basant Panchami is celebrated on the fifth day of Magh month in the advent of spring season. It is also known as the King of Seasons because of its fascinating weather.

This season is considered to be the best in all seasons. In this season, there are crops in the fields, which makes the captivity of this season even more bright.

In addition, there is a belief that mother Saraswati was born on the same day, so Saraswati Puja programmes are also organized in many areas of India on this day.

On this day, people wear yellow clothes and worship Mata Saraswati by yellow flowers, as yellow is considered to be a symbol of spring.

This day of Basant Panchami is celebrated in various ways in different provinces of India. For many mythological reasons associated with this festival, it is celebrated with special dedication to the deities.

On this day, Basant Panchami is also celebrated as Saraswati Puja in many parts of the country, especially in North India. In which the festival of Saraswati Pujan is celebrated with a lot of fanfare by setting up a statue of Mata Saraswati.

The programme is attended by young men and students and they pray for good mind and knowledge from Goddess Saraswati. Because the winter crops are in its full form during Basant Panchami, this day is also celebrated as a celebration of prosperity by the farmers.

In Punjab province, kite flying is the customary practice on this day, this practice was started by Maharaja Ranjit Singh. Even in today’s time, kites are flown at many places in the Punjab on the day of Basant Panchami.

The day of Basant Panchami is also celebrated by the artists with a lot of fanfare, on this day they worship and exhibit their artifacts.

This day is the day of arrival of the new season. During this time, the old leaves fall and new leaves come, thereby increasing the captivity of the day.

On this day, people go to Basant Fairs at various places, and being a day of piousness, people have a special practice of bathing in rivers on this day.

In today’s time, the Basant Panchami has also been modernized like every festival. In the earlier times, people worshipped nature in the advent of spring on this day and celebrated this day peacefully as Saraswati Puja.

In which symbol of its sculptures were made by sculptors of the area. That gave them employment opportunities, but in today’s modern era, all things like sculptures to decorative items are produced by large industrial establishments.

At the same time, the festival does not see harmony among the people as before, and today, on the day of Saraswati Puja, there are incidents of violence and fighting at various places.

We must make greater efforts on the subject to understand the true meaning of Basant Panchami and maintain its ancient practices and traditions.

India has six major seasons and spring was considered to be the most prominent. That is why it is also called the King of seasons. In this season, the weather is very pleasant and it is seen to be a very pleasant one.

This season, there are crops in the fields and the farmers are also very cheerful by looking at their good crops. This season is much better in terms of health.

It has also associated with a number of historical and mythological stories from the day of the Basant Panchami.

It is believed that Goddess Saraswati was also born on this day, so this day is also celebrated as Saraswati Puja at many places. Basant Mela (Fair) is also held at several places on the festival day.

These natural changes and characteristics further increase the importance of the day of Basant Panchami.

When universe originated, there was dullness, sadness around the atmosphere and there was no happiness in the world. Brahha Ji was very sad to see this. After which he took permission from Lord Vishnu and sprinkled water from his divine container.

When universe originated, there was dullness, sadness around the atmosphere and there was no happiness in the world. Brahha Ji was very sad to see this. After which he took permission from Lord Vishnu and sprinkled water from his divine container.

The great king of India and the ruler of Ujjain, Raja Bhoj Panwar, was also born on the day of Basant Panchami. On this day, a big banquet was held in his state. In which their entire subjects were given food and the programme started from Basant Panchami and lasted for the next 40 days.

In addition, Guru Ram Singh Kuka, who founded the famous Guru and Kuka sect, was also born on the day of Basant Panchami. A lot of work was done by them for the betterment of Indian society.

Due to all these historical events, the day of Basant Panchami is so popular in the people and it is celebrated with a lot of fanfare all over India for various reasons.