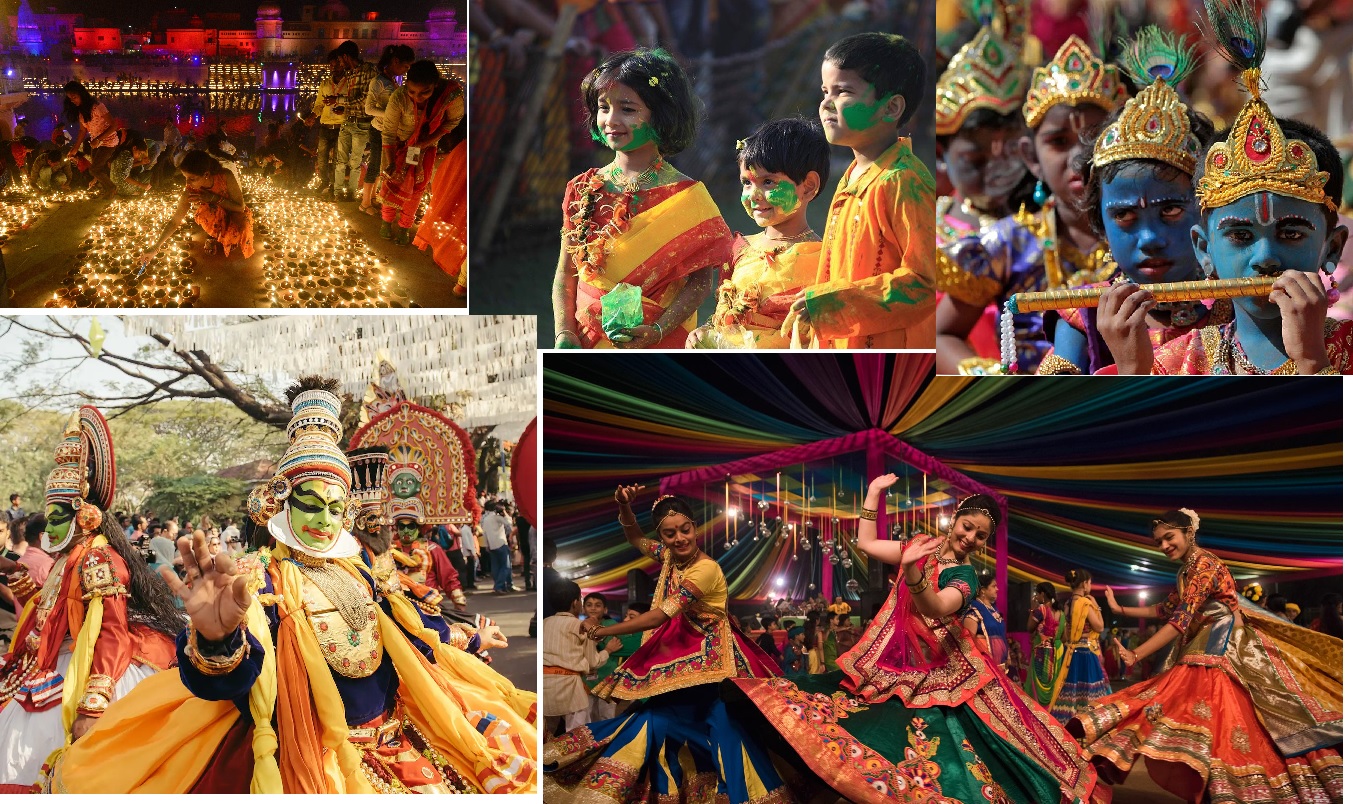 All over the world, India is well known as a country of traditional and cultural festivals because it is a country of multi-religious and multi-culture. In India, one can enjoy festivals every month. It is a secular country full of diversities in religion, language, culture and caste, it is always full of people in fests of fairs and festivals. People belonging to every religion have their own cultural and traditional festivals.

Some festivals are celebrated by people of all religions throughout the nation. They celebrate every festival in a different fashion according to the important history, customs and faith behind them. Every festival has a history, mythology and a special significance of celebrating. The people of India living abroad celebrate India’s festivals with great enthusiasm and passion.

Every Hindu festival has its own special method of celebrating, giving a ganges water bath to deiteis and goddesses, fasting, bathing in gangawaters early in the morning, donating, listening to the story, offering holocaust, Aarti, etc., by which the worship is done. All the people of Hinduism celebrate their festivals together without caring for caste, age, and gender.

There are many ancient and sacred religious scriptures (Bhagavad Gita, Mahabharata, and Ramayana, Rigveda, Samveda, Yajurveda, Atharvveda) Hindu goddess, etc., there are many beliefs in Hinduism. The day of birth and death of deities in Hinduism is also celebrated with great enthusiasm such as dance, song, etc.

As India is seen as a multi-religious, cultural, and traditional country, it is also known for its unity in diversity. The Sikh people have a lot of different customs that they celebrate with full-heart and fun. They remember the lives of their ten Sikh Gurus and the lessons they have given. Some Hindu festivals are celebrated by Sikhs due to different reasons.

The method of worship on all festivals in Sikhism is directed in the Sacred Book called “Gurugranth Sahib”, which was first compiled by Sikh Guru, Guru Nanak and later edited by Sikh Guru, Guru Arjun. The Guru Granth of Sikhism has been revered instead of the gods among the people and while celebrating any Sikh festival, they put it in a palanquin and take it out with the public procession. To connect with God, they reiterate Gurubani songs, sacred songs, reading sacred books, and religious songs while celebrating their festivals.

The people of Jainism celebrate many customs and religious rituals as festivals. Their customs relate to idolatry in various ways and the festival relates to the events of the life of the Tirthankaras who were involved in the purification of the soul. Their customs are divided into two parts, work and action.

According to Jain Shwetambar, there are six essential duties called the aavashyakaash (essentials) which are as “Chaturvishanti-Stav: Praising Tirthankars, Kayotsaraga: Meditation, Pratikramana: Atonement for past bad deeds, Pratyakhyanaa: To sacrifice the thing, Samayikaa: peace and meditation, Vandan: Respecting gurus to become self-restrained”.

According to Jain Digambar, there are six duties which are “Dana: Dan, Devpuja: Worshipping Tirthankaras, Guru Upasthi: Respecting Gurujans, Becoming self-restraining, Sanyama: controlling yourself by different rules, Swaadhyaaya: reading religious texts, Tapa: Penance” which is the basic custom of Jains.

India is a land of different cultures and caste because of celebrating colourful festivals by people of different religions. Christianity followers celebrate festivals like Christmas, Easter, Good friday, etc., with fun and great enthusiasm. People of other religions also celebrate Christmas, a sign of unity in diversity in India. There are many famous places in India where Christian festivals are celebrated like Goa, where the oldest and most beautiful churches exist. They feast, pray, and processions are carried out during their celebration.

The people of Buddhism celebrate by adjoining with their Lord Buddha and Bodhisattva. It is believed that the Buddhist ceremony was first started by Lord Buddha and he advised his devotees to stay in touch with each other to strengthen their bondage. They have their own customs and beliefs to celebrate the historical festivals. They worship historical objects to celebrate their festival.

Their celebration becomes more religious, spiritual and intellectual, which is not obliged to serve any community.

Below is the list of all the Buddhist festivals: