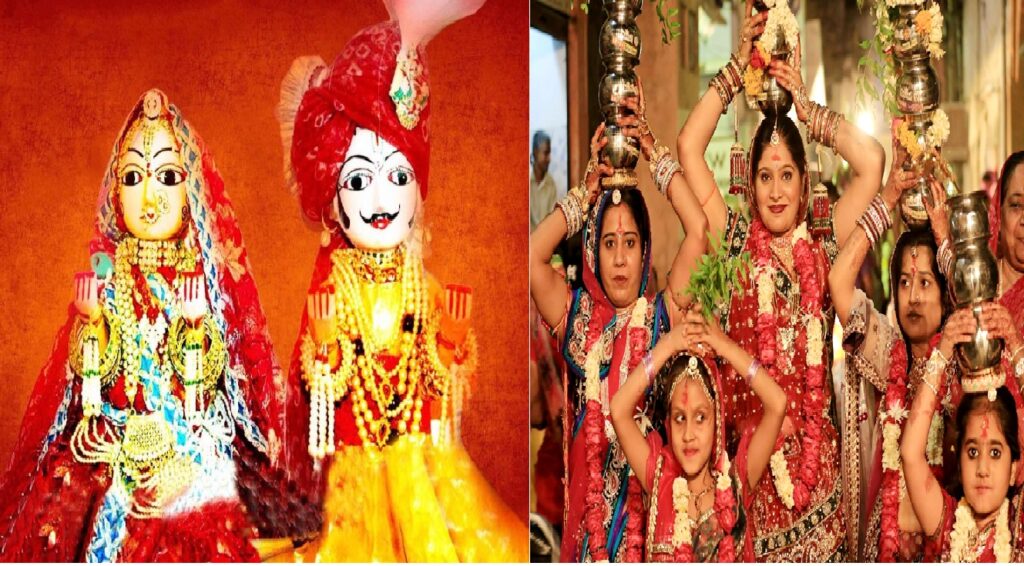 However, the festival is celebrated with a lot of fanfare in Rajasthan rather than elsewhere.

This festival of Gangaur is dedicated to Lord Shiva and Goddess Parvati, which begins on the day of Holi and lasts for the next 18 days.

In Rajasthan, there is a belief that newly married women must make a vow of a Gangaur with the desire for a Suhaag (Longevity of married life) and good fortune.

The festival is very popular in Rajasthan and its border areas, especially in Jaipur and Udaipur, people come from far away to witness the grandeur of this festival

Why is the Ganguar festival celebrated? (Why Do We Celebrate Gangaur Festival)

Lord Shiva and Goddess Parvati are worshipped by women at the Gangaur Festival or also known as Gauri Tritiya. Many stories are prevalent about the genesis of this festival.

According to the Shiva Purana, Goddess Parvati had made great penance to get Shiv Ji as her husband. Pleased with her penance, Shivji had accepted her as his wife while emerging in front of her.

In addition, according to another story, Goddess Parvati was pleased with the service of women and poured a suhaag nector on them.

It is recognised that on this day, the worship and fasting of Eesar (Shivji) Gauri (Parvati), married women becomes a monolithic saubhagyavati, and the unmarreid girls by taking this vow, it is believed that they get the desired groom.

Gangaur Festival is very famous in Rajasthan and its border areas.

There is a lot of enthusiasm for women about this festival of Gangaur, especially in Rajasthan, preparations are started long ago.

The festival begins on the second day of Holi and concludes on the third day of the Shukl fortnight of Chaitra month, which is why it is also known as Gauri Tritiya.

At this festival, women worship Lord Shiva (Isar ji) and Goddess Parvati (Gauri). In the meantime, women eat only one meal for 18 days.

In this festival, Lord Shiva, known as Isar, and Goddess Parvati, known as Gauri, are worshipped. In this pooja, the clay statues of Isar and Gauri are created.

However, in some houses, the sculptures are also made of wood and are painted by eminent arts in the evening on the day of Pujan.

At the same time, the clay lamp is also burnt by women in a pottery called Gudlia. Gudhlia is a type of pottery with many holes.

On the seventh day of after Holi, unmarried girls rotate in the village by lighting a lamp in a pot on their heads and singing songs. In the meantime, they receive small gifts from people in the village such as money, sweets, stealthy, ghee, etc.

The festival lasts for the next ten days and on the last day of the Gangaur festival, the girls break their pottery and the dibaris and the lamps inside it are thrown into a well or water pool.

Then they share gifts and eat the sweets amongst received from the people to enjoy and celebrate.

It is believed that telling and listening to this story rescues you from all kinds of sufferings and the person receives good fortune and atal Suhaag (last long happy married life) in life.

This story is as follows:

Once, Lord Shankar and Goddess Parvati went on a tour with Naradji. After a long visit, they reached a village on the day of Chaitra Shukla Tritiya.

Hearing the news of their arrival, the high aristocratic women of the village began to make tasty meals for their reception. They were delayed by making food.

However, after hearing the news of the arrival of Shiv Parvati, the women of the simple families had already reached there and worshipped them with turmeric and rice, and they were impressed by their service and the goddess Parvati sprinkled all her suhaag nector over them. So that they were blessed with the attainment of Atal Suhaag.

After a while, the high-rise women also came to Lord Shiva and Goddess Parvati with a variety of dishes in the gold-silver thal (plate). Seeing those women, Lord Shankar told Goddess Parvati that you sprinkled all the suhaag nector on the women of the simple clan, what will you give them now.

Listening to Lord Shiva, Goddess Parvati said, “O Prannath, you don’t worry about it.” I have given them only a suhaag nector made of upper substances, so their necotr will be embedded with their Sarees.

But I will give a splash of special suhaag nector from my blood to all those who have come to serve us with true reverence among these high-rise women, and the woman who is being sprinkled with that suhaag nector will be blessed.

By saying this, goddess Parvati cut her finger and sprinkled her blood on the high aristocratic women, and the drop had reached those high-rise women who came with a true reverence to the service of Lord Shiva and Goddess Parvati, and the women who had this drops became Saubhagyvati.

But the women who came to showcase their splendor and wealth did not receive this special suhaag nector of Goddess Parvati and had to return empty hand.

When the worship of women was over, goddess Parvati took command from Shivji and bathed on the banks of the river and worshipped him by making Shiva statue of sand.

After worshipping, she bathed on the river bank and planted the Shiva statue of sand and offerred divine dish. After all, she put Tilak on his forehead and had two particles of sand. While doing all this, goddess Parvati was too late and when she came back, Shivji asked her the reason for the delay.

In reply, Goddess Parvati was hesitant and told lie that I had met my brother and sister-in-law. It was late because of talking to them, but how could she hide something from Mahadev? On this, Shivji asked what you had offerred after doing pujan on the river bank and what prasad you had eaten.

On this, goddess Parvati lied again and said that my sister-in-law has fed me milk-rice and I am coming straight here after eating it. Mahadev said, “I also have to eat milk-rice and that too on the river bank.

With this instance of Shivji, Goddess Parvati was very confused and remembering the Shivji in mind prayed to Lord, I am your ultimate devotee, and take me out of this dilemma.

Parvati Ji, who prayed, continued walking behind Lord Shiva. There appeared the magical palace of Maya on the distant banks of the river. Within that palace, they see that Shivji’s brother in law and his family were present there. They welcomed Gauri and Shankar with the true spirit of reverence. They stayed there for two days.

On the third day, Parvatiji asked Shiva to make a move, but Shivji was not ready. He wanted to stay more now. Then Parvatiji stood and started alone. In such a situation, Lord Shivji had to walk with Parvati.

Naradji also walked together. On the go, they came too far. At that time, Lord Sun was moving to set (west). Suddenly, Lord Shankar spoke to Parvatiji, I have forgotten my garland in your brother’s palace.

‘‘Well, I’ll take it. Parvatiji said and was ready to go. But God did not command her to go and sent the Brahmaputra Naradji for this work. But when he reached there, Naradji did not see any palace. There was a forest in the far-flung forest, with wild animals being wandering.

Naradji began to wander there and think that if he had not come to a wrong place? However, suddenly, there was the bright lightning and Naradji saw Shivji’s garland hanging on a tree.

Naradji took off the rosary and reached out to Shivji and told him the situation. Shivji laughed and said, “Narad, this is the lila of Parvati.

Parvati said, My Lord, what i deserve. Naradji bowed his head and said, “Mother, you are the best among the pious married souls. You are Aadishakti in Saubhagyavati society.

All this is the effect of your piousness. The women of the world can only gain irrevocable good fortune from your name and remembrance and create and wipe out all the principles.

Then Karma, What is the great thing for you? Confidential worship is always more powerful and meaningful than appearances.

I am very happy to see your spirit and miraculous power today. That is why I say in blessings that “woman who wish to worship secretly and pray for her husband in secret will receive the togetherness of longevity with husband blessed with long life with the grace of Mahadevji.”

There has been no significant change in the Gangaur festival since the old times. All the ancient traditions of this festival are still followed by the people.

However, with the change in time, need of changes in view of the time of the festival, as we want, to put the used or the debaris on the ground instead of throwing them into the well or the water pool or breaking it into the soil.

Which will also be very favourable for the environment. If we keep these things in mind, we can make this special festival of Gangaur Festival even more special.

Third day of Chaitra Shukla is also known as Gauri Tritiya. The festival is celebrated mainly in Rajasthan and its border areas and serves to showcase the culture and beliefs of its native region.

This festival serves to tell us the importance of true reverence and gives a message that we should stay away from wealth and pretentiousness in our lives.

This festival is done by married women to maintain the longevity and good fortune of their suhaag (Husband and married life).

At the same time, the festival serves to bring sweetness to the relationship between the wife and husband.

The Ganguar festival is also called the pride of Rajasthan and Malwa. There is no specific evidence as to how the Gangaur festival started.

There are many stories about this festival, one of the stories is the visit of Shiv Parvati, which has been described in the above paragraphs. The festival is celebrated with great reverence by both married and unmarried women.

Because of its special custom, this festival is very popular among the common people, it gives us a sense that we should worship God with simplicity while away from appearances and greed in our lives.