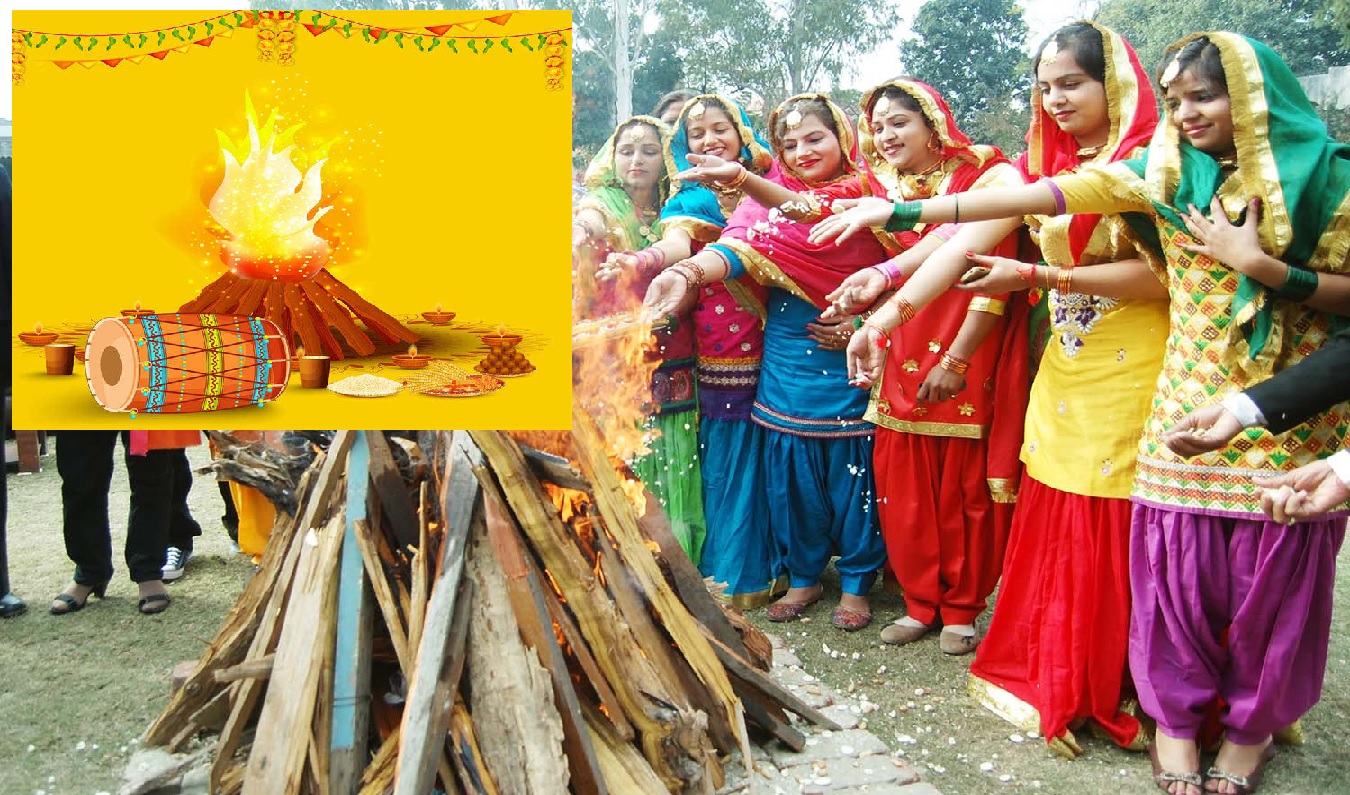 Lohri, the most popular festival in Punjab, is celebrated every year by the people of Sikh religion of South Asia. It is believed that it is celebrated in winter on the day when the day is the shortest day and night is the longest of the year.

It is celebrated as a farmer festival by lighting a bonfire, dancing and singing the praises of Dulha-Batti. It is mainly a festival of Punjabis, but it is also celebrated by people living in the northern states of India like Haryana; Himachal Pradesh etc.

Why is Lohri celebrated?

There are many beliefs that the Punjabis have to celebrate Lohri. Some of which are given below.

Another belief in celebrating the festival of Lohri is that Lohri was incepted in the name of Holika’s sister, people believe that Holika’s sister had survived, although Holika herself died in the fire.

Another reason to celebrate this festival is that the word Lohri originated from Tilorahi (a combination of sesame and rorahi).

Farmers celebrate Lohri as the beginning of the new financial year.

How to celebrate Lohri?

Like other festivals, this festival is celebrated by people in India with a lot of joy and zing. It is a festival that, in one place, brings together all family members, relatives and friends. On this day, people meet and enjoy with each other and distributes sweets. It is the most famous harvesting festival which is of great importance to the farmers. People light a bonfire on this day, then sing and dance around it. They put some revadi, toffee, sesame seeds, popcorn, good things in the fire while singing and dancing around the bonfire.

It is celebrated in different provinces of India with different names such as the Bhogi in Andhra Pradesh, Megh Bihu in Assam, U. P., Bihar and Makar Sankranti in Karnataka, Pongal in Tamil Nadu etc. In the evening, a puja ceremony is held in which people worship the fire and revolve around the divine bonfire and receive blessings for future prosperity. People enjoy eating delicious food, such as makke ki roti (corn bread), sarson ka saag (mustard greens), til (sesame), gudd (jaggery), gajjak, peanuts, popcorn, etc. Everyone dances and sings and enjoys the offerings of Lohri.

On this day, all netizens wear beautiful and colourful clothes and dance on the beats of the drums (a musical instrument) performing bhangra (Gidda). The festival of Lohri marks an early form for the new financial year for farmers. It is celebrated every year by all the people living in India and abroad. The festival of Lohri is as important for the married couple as for the first child born at home.

On this day, the bride is equipped with all the things, such as new bangles, dresses, nice vermilion, henna, sarees, stylish hair well dressed with new clothes and a husband wears colourful turbans. On this day, every new bride is given a lot of gifts, including new clothes and jewellery, on behalf of her in-laws.
On behalf of both the family (groom and bride) members and other chief guests are invited together in this grand ceremony. The newly married couple is seated in one place and some gifts are given to them by other family members, neighbours, friends, relatives. They all bless the new couple for their better life and brighter future.

The first Lohri of the newborn baby is also celebrated in a very grand manner. This is the most important opportunity for a new baby born in the family. Everyone welcomes a new child in the family by giving them the necessary things as gifts for the child. The mother of the child sits in a place with a well-groomed child in her lap. The child feels very good in the lap of mother clad with new clothes, the ornaments and the menhadi hands. The child gets a lot of gifts from both paternal grandparents and maternal grandparents (including clothes, ornaments, fruits, peanuts, sweets, etc.

Today, the Lohri festival has been modernized. The first people used gajjak and sesame seeds to give gifts, however, modern people have started giving chocolate cakes and chocolate gazzak gifts. Because of the increasing pollution in the atmosphere, people are very conscious and very conscious about environmental protection and its safety while celebrating the Lohri. They try to plant trees during this occasion instead of cutting too much woods to light the bonfire on the Lohri.

The main winter crop is wheat which is sown in October, harvested at the end of March and early April. Before harvesting and collecting and bringing home, farmers enjoy this Lohri festival. It is in the middle of January according to the Hindu clan when the sun is away from the Earth. In general, the festival of Lohri is an indicator of the end of winter and the coming of Basant. During the festival, people bathe in the holy Ganges river to liberate them from their sins.

Everyone is celebrating this festival to attain happiness and prosperity throughout life. This is the most auspicious day that indicates the sun’s entry into Capricorn, it starts from January 14 and ends on July 14. Some people celebrate it as an end i.e. on the last day of the month Margazhi (9 months according to the lunar calendar).

There is a old history behind celebrating the Lohri. It marks the end of the winter season with the start of the New Year’s sign and the spring season. People recognise that the night of Lohri is the longest night of the year, since then every day gets bigger and the nights gradually begin to get shorter. It is celebrated in praise of the Dulha-batti, which was a Muslim robber in the time of King Akbar.

He used to steal money from the houses of rich people and distribute it to the poor people. He was like the hero of poor people and helpless people, he saved the lives of various girls who were forcibly taken away from their homes by strangers. He helped the helpless girls by paying dowry in their marriage. So, the people started celebrating the Lohri festival in praise of the Dulha Bhatti for the great work of the poor people who had done a lot of help for the poor people.

The phenomenon of Lohri indicates the motion of the sun from south to north, and enters the Tropic of Capricorn from the Tropic of Cancer. Lohri Festival is dedicated to Lord Sun and Fire. This is one of the happiest occasions for every Punjabi. The sun and fire represent the greatest source of energy as well as the spiritual power that people worship to receive blessings. People offer some food to their deities in the form of peanuts, sweets, popcorn, sesame, Chirwa, Revdi, Gajak, etc. It is celebrated by people of both religions (Sikhs and Hindus).

Rules and Methods of Lohri Festival

On the day of Lohri in the morning, the children of the House demand to go out and with some money and food items such as sesame or sesame seeds, Gajak, groundnut, jaggery, sweets, revdi, etc. They also sang a song praising the Dulha Bhatti, who was a hero for punjabi people.

After sunset in the evening, people light a divine bonfire together in a harvested crop field. People sing and dance songs around the divine bonfire. They throw some rice, popcorn or other food items into the fire and shout loudly, “Aadar Aaye Daliddar Jaaye” that meanss, poverty is removed and there is a lot of prosperity in the house. They pray to their God Fire and the Sun for abundance of land and prosperity.

After the puja ceremony, they meet their friends, relatives, neighbours, etc., and distribute gifts, offerings with greetings and a lot of good wishes. They enjoy eating delicious foods dinner such as Makke ki Roti and Sarson ka Saag (corn bread and mustard greens). They specially make sugarcane juice kheer as a sweet dish to celebrate this day.

They perform the special type of dance on the beats of drum and dhol. The day after Lohri is indicative of the beginning of Magh month which is called Maghi Day. On this holy day, people dive into the holy Ganges river and give some donations to the poor. They arrange for a big feast for the birth of a new child and a newly married couple at home. They dance on traditional Bhangra songs at the rhythm of musical instruments like dhol and drums.

It is a great festival when people take a respite from their busy schedules or jobs and enjoy with each other. It is a great celebration that brings a sense of unity and brotherhood to all. People thank their almighty for giving a happy and prosperous life on earth.