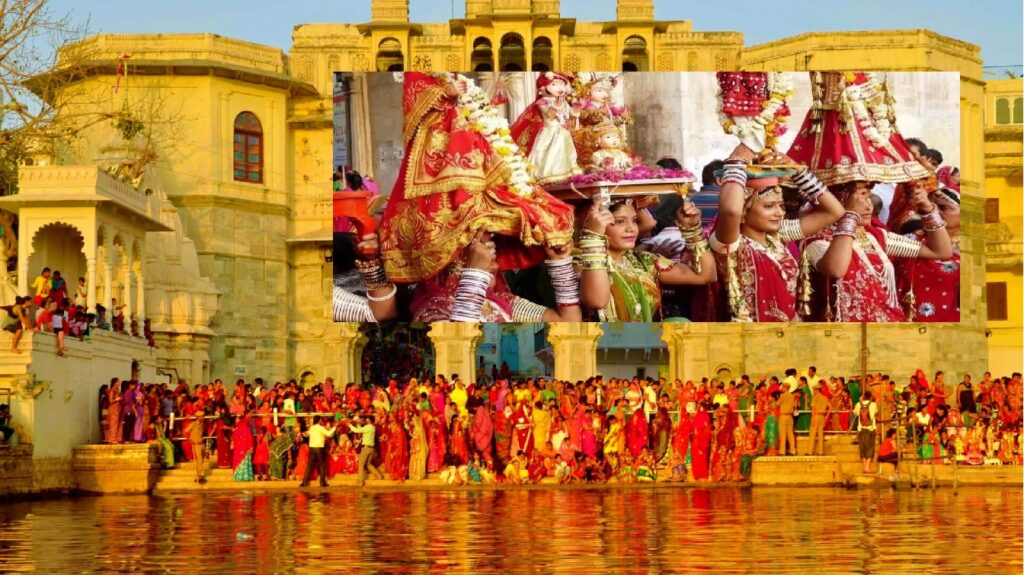 The festival of Mewar is celebrated every year with great zeal and joy by the people of Udaipur, Rajasthan and India for the reception of the spring (the arrival of the King of seasons).

It is the second surviving cultural festival of India’s World Heritage, which is celebrated annually in Udaipur. It’s three days; Runs from April 04 to April 06 and is full of fun activities.

It is celebrated in Udaipur, a heritage city of India, to lead India’s ancient culture and tradition as well as to protect all the living heritage of Mewar in Rajasthan.

Udaipur for tourists is one of the famous recreational and spiritual landmarks of India, and located on the banks of The Pichola Lake and is surrounded by beautiful and charming hills.

It is famous for many protected shelters or sanctuaries and Udaipur celebrates the Mewar Festival, the second surviving festival of World Heritage every year. Celebrations of Mewar Festival gives an opportunity to showcase all living heritage of Mewar, art, traditional singing, dances, food, colours, cultural diversity, etc.

How Mewar festival is celebrated

The Mewar festival is celebrated every year by organising many traditional, cultural, artistic recreational activities of the Mewar region.

Every year, a colourful festival of colours is organized to commemorate the living heritage of Mewar. People attend the festival and participate in entertainment-filled activities as well as learn local arts directly from professional artists.

Various seminars are organized in Mewar with the aim of combining traditional handicraft with modern and contemporary style to reconstruct the style of old art in a new form.

The event provides an opportunity to handicrafters to show new efforts in their qualities and arts for the entire three days by making new developments possible in the new era in historical arts and crafts.

The festival is organized by Maharana of Mewar Charitable Foundation with the objective of keeping the process of heritage conservation regular.

Colourful presentation of food and beverages are organized through Rangoli aka H.R.H. Group of Hotels. There are professional cooks living there to create cultural, traditional, and colorful cuisine of food.

The Mewar festival is celebrated annually by the people of Mewar to welcome the beginning of spring, which spreads the charm and happiness all over India.

It is celebrated with the Gangaur Festival of Udaipur, which is of great importance to the women of Rajasthan. They prepare their selves very well in traditional and cultural garments to join the festival.

They perform special folk dances during the festive celebrations to create charm at the festival.

The festival has the participation of various types of rituals and traditional activities.

They dress the statue of Lord Esar (Lord Shiva) and Goddess Parvati and take a Shobha yatra, which takes place from different parts of the city and reaches the Gangaur Ghat, Pichola, where the statue is transported in a special boat for immersion in the water in the middle of the lake.

The festival of Gangaur is celebrated with recognition of the strength of couples (husband and wife or lovers), considering the pair of Lord Shiva and Goddess Parvati as ideal pairs.

The festival of Gangaur is especially celebrated by women to receive the blessings of the ideal pair. Special sweet Ghewar is prepared to offer to Deities and distributed as offerings among the people.

As the religious activities of the festival are completed, the cultural festival begins to be showcased through Rajasthani folk dances and folklore etc. The festival ends with burning crackers and sparklers, which are enjoyed by the participants and people.

The facility of Maharana Pratap Airport near Udaipur city makes it much easier to travel from any of the major cities in India, such as Mumbai, Delhi, Jaipur, Ahmedabad, Kolkata, etc. Train and bus services are also available from major cities of India to Udaipur city.