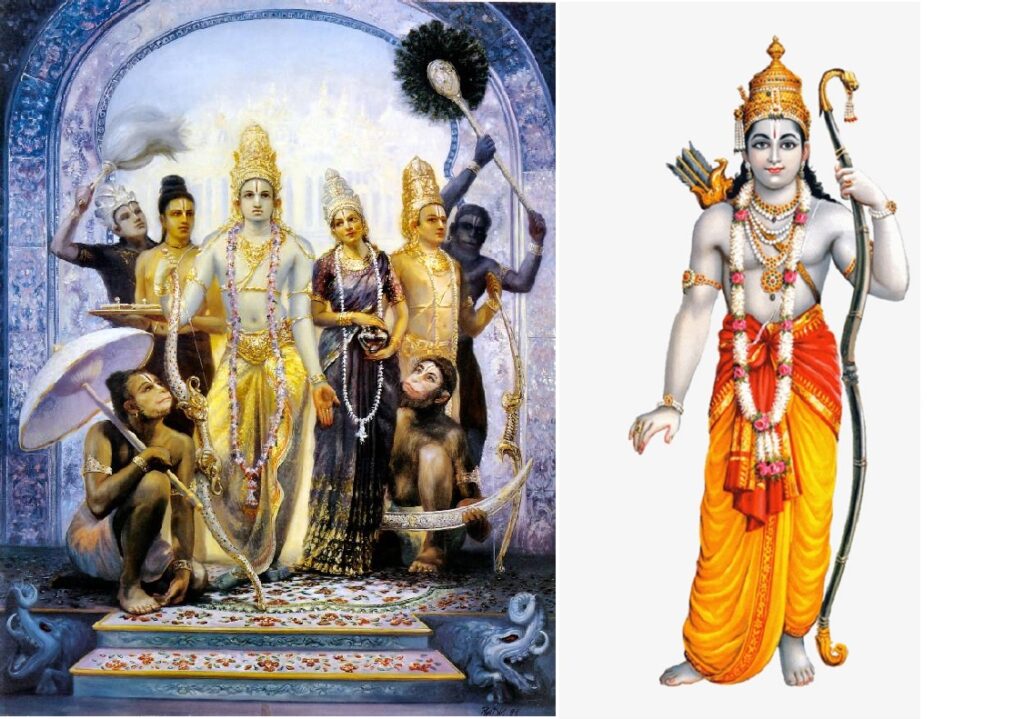 Ram Navami is an epic, religious and traditional festival celebrated and commemorated with full enthusiasm by the followers of Hinduism.

It is celebrated as the birthday of Lord Rama, the son of King Dashrath and Rani Kaushalya of Ayodhya. Lord Rama, the Hindu deity, was the 7th incarnation of Lord Vishnu’s Dashavatar.

According to the Hindu calendar, the festival falls on the 9th day of the Shukl Paksh (fortnight) of Chaitra Maas (month) every year.

Ram Navami is also known as the Shukla Paksha Navani Of Chaitra Maas, which ends with the nine-day long festival of Chaitra-Navatri.

The people of Hinduism celebrate it as a nine-day festival, by organising the monolithic text of Ram Charit Manas, religious bhajans, Havan, traditional Kirtan and distribution of prasad after Pooja and Aarti, etc during the entire nine days.

Devotees make idols as the infant of Lord Rama and worship God in front of him. As everyone knows, the 7th incarnation of Bhagavan Vishnu was Lord Rama and he was born to remove their problems among the common people.

People equip temples and other shrines to perform their traditional rituals and offer fruits and flowers to the Lord in order to overcome their problems and achieve a lot of prosperity and success.

They all gather at temples or other shrines to chant Vedic mantras, aarti and many other religious bhajans on this day.

Many devotees celebrate this festival by fasting for the entire nine days and they get full blessings on the last day of Navatri.

The Southern Indian people celebrate this day as the wedding anniversary of Lord Rama and Mata Sita. All temples are decorated to celebrate Navatri in the southern region.

However, according to Valmiki Ramayana, the people of Mithala and Ayodhya celebrate the wedding anniversary on Panchami as Vivah Panchami.

The Rath Yatra or Julus of Lord Rama, Mata Sita, Laxman and Hanuman ji, signified as Shobha Yatra is extracted by thousands of devotees after taking a holy dip in the Holy River Ganga or Saryu.

The Ramayana is a great and religious epic of Hinduism, which tells the history of King Dashrath of Ayodhya and his son, Lord Shri Ram.

Once in the Treta Yug (era), there was a king named Dashrath, who had three wives (Kaushalya, Sumitra and Kaikeyi). They had no children, because of which they were anxious for the future king of Ayodhya.

One day, the great Sage Vashishth advised him to perform the Santaan Prapti Yagya (sacrificial fire for the desire of children) to fulfil the desire to have the son.

Hrishyashring in particular, was invited to perform this Yagya (sacrificial fire ritual). After completing the Yagya, the Yagya Devta (Deity of Divine Fire Ritual) gave him a bowl full of divine kheer.

He gave the divine kheer of the bowl to feed the three wives. A few days after eating kheer, all queens became pregnant.

Ram, the son of Kaushalya, was the 7th incarnation of Lord Vishnu, who was born on Earth to destroy iniquity and establish Dharma. Lord Rama saved his devotees from the attack of the wicked, and he established Dharma on earth by destroying iniquity from all the earth by annihilating Ravan including all demons.

The inhabitants of Ayodhya were very happy with their new king, so they began celebrating their king’s birthday every year with great enthusiasm and joy in the form of Ram Navami, which is a tradition today and religiously celebrated by Hinduism followers all over India.

The people of Hinduism living in the southern region of India usually celebrate this festival as Kalyaanotsavam which is celebrated as the wedding ceremony of God.

They celebrate it, on the day of Ram Navami, with statues of Hindu deities Ram-and Sita in their homes. They take a shobha-Yatra (showtrip) with idols of God at the end of the day to celebrate Ram Navami.

It is celebrated by different names at different locations; For e.g., Chaitra Navatri in Maharashtraand is celebrated in Andhra Pradesh, Karnataka or Tamil Nadu in the name of Vasantotsav etc.

They invite Pandit Ji to perform Havan (divine fire) and Katha (religious stories). To remove evil powers from their homes and bring good powers and energy to their homes, they read Religious hymns, Mantras and Aarti at the end of the pooja. They also pray for the good future of their family members and their children.

They fast for the holy annual puja for the entire nine days and fast particularly on the last day of Navatri. They recite the holy epic Ramayana of Hindus.

They worship Lord Rama and Sita to bring happiness and peace in their lives. They wake up early in the morning and worship the Sun, the God of Hindus, after bathing.

People worship Mata Sita, Laxman and Hanuman with Lord Rama, because they are all connected to each other with heart.

Ram Navami Festival is a festival of great importance for the people of Hinduism. Celebrating the festival of Ram Navami on the 9th day of Chaitra, symbolizes the withdrawal of evil powers from the Earth and the advent of divine powers on Earth.

To establish dharma by removing devilish powers from the earth, Lord Vishnu was born as the son of King Dashrath of Ayodhya.

Ram Navami is a traditional ceremony for the people of Hinduism, which they celebrate with full enthusiasm to sanctify their souls and bodies.

Lord Rama came to establish Dharma by killing the Demon King Ravana to fulfil the special task or responsibility on earth.

The eve of this festival showcases the triumph of goodness over evil forces and the establishment of Dharma after wrongdoing.

The festival of Ram Navami begins in the morning with offering Jal (divine water) to the Sun, the Hindu deity. Because people believe that the Sun was the ancestors of Lord Rama.

People join the devotional bhajans throughout the day and listen to many Hindu religious books. Vedic mantras are chanted by religious people or communities on the occasion.

Fasting on this day is another important way to keep the body and mind clean. In some places, people organise religious and cultural festival Ramlila, to tell the history of the life of Lord Rama in front of the people. People dramatically tell the whole history of Lord Rama’s life.

The traditional and magnificent Procession of the Rath Yatra on Ram Navami festival is the best way to showcase the peaceful Ram State. In which people decorate the idols of Lord Rama, Mata Sita, Laxman and Hanuman beautifully and then take a Shobha-Yatra (showtrip) in the streets.

Usually, people bathe in the holy Saryu River of Ayodhya with the recognition of complete purification of the body and soul.

People from the southern region celebrate this occasion as the anniversary of the marriage of Lord Rama and Mata Sita, which symbolizes the enhancement of the bond of love between husband and wife.