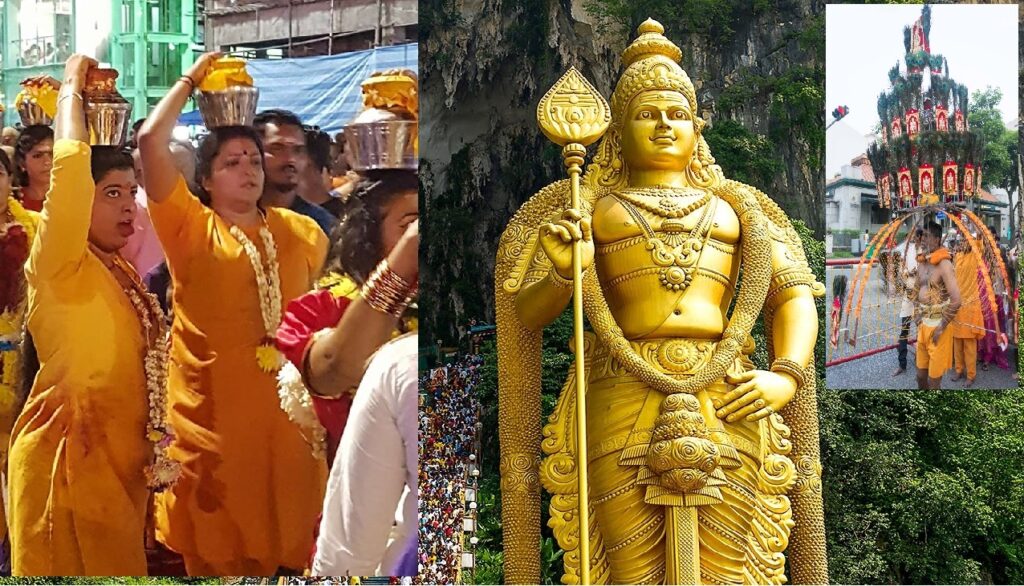 The festival of Thaipusam is one of the major festivals celebrated in South India. The festival is celebrated with great enthusiasm by the Tamil community in Tamil Nadu and Kerala as well as in other countries like USA, Sri Lanka, Africa, Thailand.

Lord Murgan, the eldest son of Shiv Ji, is worshipped at this festival.

The festival is celebrated on the full moon day of the Thai month of the Tamil calendar.

The festival is a major festival of Tamil Hindus. This day is seen as conquest of good at evil and many mythological stories associated with it exist in history.

This festival of Thaipusam reminds of mythological stories. It is believed that on the same day, Lord Karthikeya had slaughtered Tarkasur and his army.

That is why this day is seen as a triumph of good over evil and this special festival of Thaipusam is celebrated on this day.

This festival of Thaipusam tells us what devotion and reverence means in our lives because it is that power. That serves to overcome the great distress in our lives.

This special festival of Thaipusam begins with the full moon of the Thai month and lasts for the next ten days. In the meantime, thousands of devotees gather in temples to worship the Murgan God.

In the fest, a large number of devotees go to the temple to worship in special ways. Many of these devotees take divine parasol on their shoulders and go to temples.

In the fest, they dance and goe ahead with the chant of ‘ Vel Vel Shakti Vel ‘, which serves to infuse a new energy into the devotees of Lord Murgan and enhance their morale.

To reveal his unwavering reverence for Lord Murgan, some devotees go to visit their tongues by piercing with a needle. In the fest, a yellow dress is worn mainly by devotees and lord Murgan is offered yellow flowers.

For this special pooja, devotees of Lord Murgan prepare themselves through the prayer and fasting. On the day of the festival, devotees take a caravan and go for darshan (divine visit).

Some devotees carry a pot or a milk pot in the form of Kanvar (divine parasol). Some devotees suffer severe sufferings for Carrying the burden of the caravan by piercing up in their skin, tongue or cheek.

Through this, they demonstrate their unwavering reverence for God Murgan.

The tradition of Kavadi Attam in Thaipusam also has a mythological significance. According to which Lord Shiva once ordered August Rishi to set up two mountains in South India.

According to Lord Shiva, he set up both Shaktigiri Mountain and Shivgiri Hill in a forest, and he gave the work to his disciple Idumanban.

Then Idumannban saw a young man and asked him to help lift the mountains, but the young man refused to help Idumunban and said that these mountains belong to him.

After which the war broke out between Indumamban and the young man, Idumanban realised that the young man was no one else, Lord Karthikeya, the son of Lord Shiva himself.

Who left Mount Kailash after being defeated in a competition from his younger brother Ganesh and started living in the jungles. Later on, when urged by Lord Shiva, he is agreed.

In this fierce war, Indumumban dies, but after that he is re-revitalized by Lord Shiva and it is said that then Indumumban said that whoever will take the Kavadi (divine parasol) to the temple built on these mountains, his will must be fulfilled.

Since then, this practice of taking Kavadi has been prevalent and the person who takes the caravan at the temple of Lord Murgan in Pilani, Tamil Nadu, is required at the mausoleum of Indumumban before going to the temple.

In the earlier times, this festival of Thaipusam was celebrated mainly in India’s southern states and Sri Lanka, etc., but in today’s time, the festival is celebrated with great fanfare by the Tamil population living in various countries like Singapore, USA, Malaysia, etc.

On this day, devotees take the Kanvad facing many sufferings and pain, but they are so absorbed in God’s devotion that they do not feel any pain and suffering.

A large number of devotees now go to God’s visit and demonstrate their reverence for God from the earlier times. At present, this festival of Thaipusam is becoming more popular day by day in the people due to its unique custom.

This festival of Thaipusam is very important. It symbolizes human reverence and devotion to God. This day gives us a sense of how much power there is in reverence because it is the unwavering reverence of the people.

Because of that, he pierces his body and adds a Kanvad, yet he does not feel any pain and suffering.

This festival dedicated to Lord Murgan serves as a new happiness in our lives. These days are also seen as a victory of good over evil. At the same time, this festival of Thaipusam is also very popular abroad.

On this day, many foreign tourists also come to see this unbearable yet devotion of Lord Murgan’s devotees and it also serves to promote Indian culture by increasing its fame.

The genesis of Thaipusam has many mythological stories associated with many legends. Its most significant story is the son of Lord Shiva, Murgan or also known as Karthikeya. is associated with it.

Once there was a fierce war between the Gods and devils. In this war, the deities had been defeated by the Demons many times.

Deadly havoc has been created by devils, disturbed by this horrific killing, all the deities go to Lord Shiva and told their anguish.

After which Lord Shiva generates a great warrior called Skanda with his power and sends him to battle devils by appointing him as the hero of the gods.

Due to which deities succeed in conquering devils. Time-lapsed and he was known as Murgan (Karthikeya). Murgan follows the rules of Lord Shivji and symbolizes his light and knowledge.

That empowers us to get rid of any kind of crises in life, and the main purpose of the festival of Thaipusam is to convey to the people that if we do good work and maintain our devotion to God, we can conquer the greatest crisis.