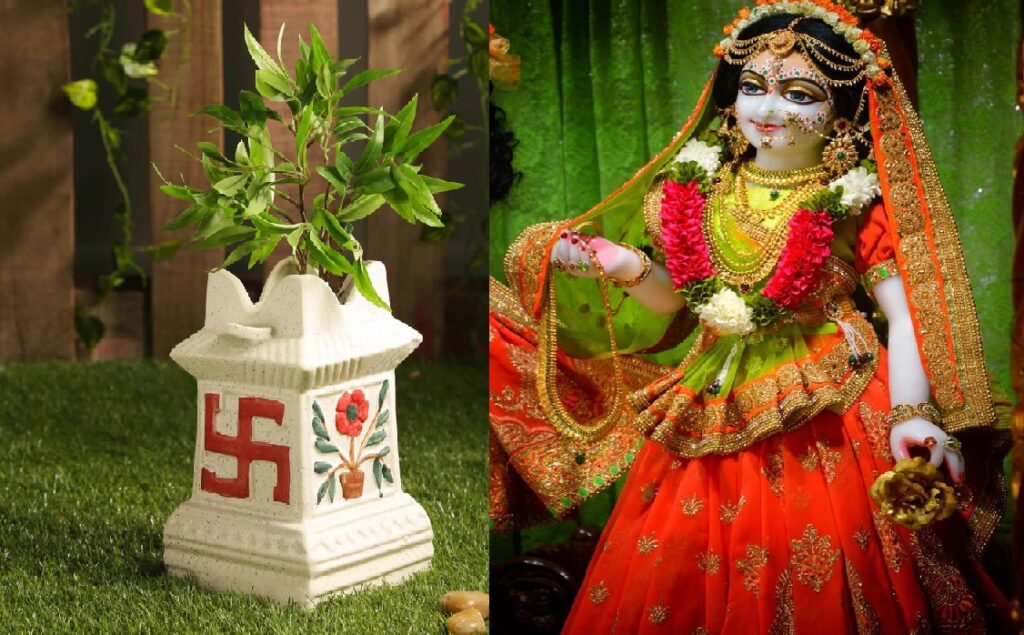 Tulsi (plant) was a girl in the previous birth, named Brinda, born in the monster clan, a devotee of Lord Vishnu since childhood. She used to devote her revering and offer her prayers with so much of affection and love towards Lord Vishnu. When she growm up, she was married to Demon King Jalandhar. Jalandhar was originated from the sea.

Brinda (Tulsi) was a very pious woman who always served her husband.
Once there was a war between deities and demons. When Jalandhar started going to war, Brinda (Tulsi) said, “Swami, you are going to war and i will sit in worship and perform rituals for your victory during the war until you come back, I Will not leave my resolve.

Jalandhar then went into war, and she took the resolution of vow and sat in worship, with the effect of her vow, the deities could not conquer Jalandhar. When all the deities began to lose, they went to Vishnu Ji.
Then everyone prayed to God, God said, “Brinda (Tulsi) is my ultimate devotee and cannot trick her.” Then the deity said to God that there is not another remedy, now you only can help us. God took the form of Jalandhar and reached brinda’s palace. As Brinda (Tulsi) saw her husband, she immediately got up from the pooja and touched his feet, as soon as her resolution was broken, the deities killed Jalandhar in the war and beheaded him, his head fell into Brinda’s (Tulsi’s) palace. When Brinda (Tulsi) saw that my husband’s head is chopped, then who is the one, standing before me?

When a plant came out of their ashes, Lord Vishnu ji said, “From today, her name is Tulsi, and one of my forms will be in the form of stone which will be worshipped with Tulsi ji in the name of Shaligram And without Tulsi Ji’s indulgence, I will not accept any offerings and revering. Since then, everyone began to worship Tulsi Ji. It is a tradition to commemorate wedding of Tulsi Ji with Shaligram in Kartik Mas to celebrate the auspicious religious event.

It is celebrated as Tulsi Marriage on the day of Dev-Uthani Ekadashi. You must be virtuous by telling this story to at least two people. Or send it to four groups.